At Trinity Prep, we feel strongly that one of the most effective ways to learn is by touching, feeling, and doing. That is part of why we encourage our students to interact with animals.

Please click through the tabs below and see what kind of animals our students take care of. 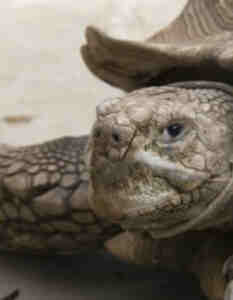 Sulcatas are the third largest tortoise species in the world and the largest mainland species. Adult males can weigh nearly 200 pounds and be close to 3 feet in length. Females tend to be smaller but may still tip the scales at close to 100 pounds.

African Spur-thighed tortoises, or simply sulcatas, are one of the largest tortoise species in the world. They hail from the hot, dry deserts of central Africa, and are well adapted for such a harsh environment. These animals get most of their water from the food they eat and may go literally months without drinking standing water.
Despite their size, sulcatas are a very popular tortoise species. They are extremely hardy and adaptable and have outgoing and friendly personalities. Although by no means ornate, they are an attractive species and make wonderful pets for the committed keeper 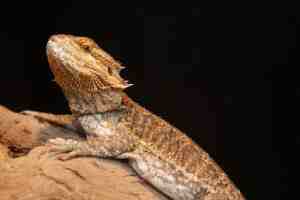 Bearded dragon lizards are native to Australia. They live in rocky and arid regions of the country and are adept climbers. Dragons have large triangular heads and flat bodies with pointed ridges along the sides. They are omnivorous, eating both insects and plants.
Bearded dragons are naturally found in the deserts and semi-arid scrub lands of southeastern Australia. They didn’t commonly appear in the US pet trade until the early 1990s, but since then their popularity has grown exponentially. They are generally easy to maintain, have gentle dispositions, grow to a manageable size, are extremely hardy, and can live over 10 years. Many hobbyists are attracted to these reptiles because of their dinosaur-like appearance. They look like they are covered with tiny, spiky scales, but they are still quite pleasant to the touch and enjoy being handled.

One behavioral trait that makes bearded dragons so appealing is their arm waving. Hatchling and baby beardies will sometimes sit and raise one of their forelimbs above their head, and then slowly lower it back down. While the real reason for this waving is related to introducing themselves as non-threatening to other dragons, it can appear as if they are waving “Hello” to you. Other appealing behavioral traits include head bobbing and stacking (one dragon perching atop another). 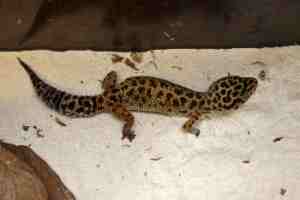 Leopard geckos, Eublepharus- macularius, are found in Afghanistan, Pakistan, and northwest India. They live on the ground in dry to semi-arid habitats where temperatures fluctuate greatly between day and night. They are active at night or during the twilight hours, but will occasionally bask in sunlight. 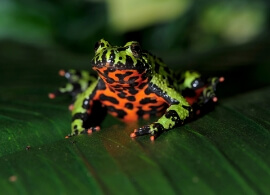 Native to China and parts of Korea and Russia, fire belly toads are usually found in humid, highland and mountainous regions with an adequate water source. They are active in the spring and summer and bury themselves in the moist, soft earth during the winter. When they reach adulthood they are about 2 to 2 ½ inches in length and weigh between 1 and 2 oz. Most fire belly toads are a bright green or lime green color, but sometimes they are more of a yellow-brown, with black splotches throughout. They are appropriately named for their brilliant red underside (occasionally their undersides are a dull orange-red). Their Latin species name is bombinaorientalis. 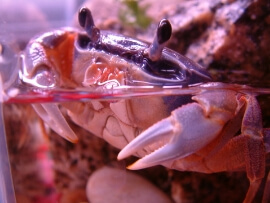 Gecarcinusquadratus, also known as the moon crab, mouthless crab or harlequin land crab, is a colorful land crab from the familyGecarcinidae. It is found in mangrove, sand dunes and rainforest along the Pacific coast from Mexico south to Peru. The taxonomy in relations to the AtlanticGecarcinuslateralis is disputed, with many considering it and G. quadratus to be conspecific.
This nocturnal crab digs burrows — sometimes as long as 1.5 metres (4.9 ft) — in the coastal rainforests of Central America, and is common along the coasts of Costa Rica, Panama, and Nicaragua. There it lives in the forest at least some of its adult life, but needs to return to the ocean to breed. The halloween crab is very territorial and will defend itself if threatened. It is largely herbivorous, and consumes leaf litter and seedlings. They will, however, also take animal matter if available. 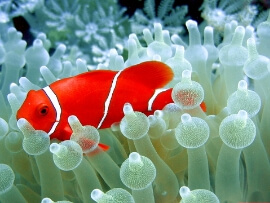 Clownfish are native to warmer waters of the Indian and Pacific oceans, including the Great Barrier Reef and the Red Sea. While most species have restricted distributions, others are widespread. They are generally highly host specific, and especially the genera Heteractis and Stichodactyla, and the species Entacmaeaquadricolor are frequent partners.

Clownfish live at the bottom of the sea in sheltered reefs or in shallow lagoons, usually in pairs. They are also found in northwest Australia, southeast Asia, Japan and the Indo-Malaysian region. There are no clownfish in the Caribbean. 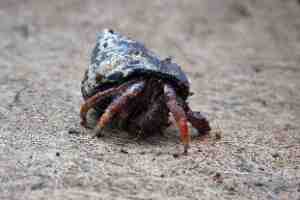 Most species have long, spirally curved abdomens, which are soft, unlike the hard, calcified abdomens seen in related crustaceans. The vulnerable abdomen is protected from predators by a salvaged empty seashell carried by the hermit crab, into which its whole body can retract. Most frequently hermit crabs use the shells of sea snails (although the shells of bivalves and scaphopods and even hollow pieces of wood and stone are utilized by a few species. The tip of the hermit crab’s abdomen is adapted to clasp strongly onto the columella of the snail shell. As the hermit crab grows in size, it has to find a larger shell and abandon the previous one. This habit of living in a second hand shell gives rise to the popular name “hermit crab”, by analogy to a hermit who lives alone. Several hermit crab species, both terrestrial and marine, use “vacancy chains” to find new shells: when a new, bigger shell becomes available, hermit crabs gather around it and form a kind of queue from largest to smallest. When the largest crab moves into the new shell, the second biggest crab moves into the newly vacated shell, thereby making its previous shell available to the third crab, and so on.

Of about five hundred known species, most are aquatic and live in varying depths of saltwater, from shallow reefs and shorelines to deep sea bottoms. Tropical areas host some terrestrial species, though even those have aquatic larvae and therefore need access to water for reproduction. 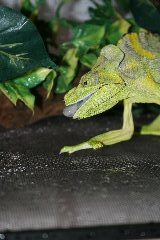 Chameleons or chamaeleons are a distinctive and highly specialized clade of Old World lizards with 202 species described as of June 2015. These species come in a range of colors, and many species have the ability to change colors. Chameleons are distinguished by their zygodactylous feet; their very long, highly modified, rapidly extrudable tongues; their swaying gait; and crests or horns on their brow and snout. Most species, the larger ones in particular, also have a prehensile tail. Chameleons’ eyes are independently mobile, but in aiming at a prey item, they focus forward in coordination, affording the animal stereoscopic vision. Chameleons are adapted for climbing and visual hunting. They live in warm habitats that range from rain forest to desert conditions, various species occurring in Africa, Madagascar, southern Europe, and across southern Asia as far as Sri Lanka. They also have been introduced to Hawaii, California, and Southern Florida, the general span between port St. Lucie and the Florida Keys, and often are kept as household pets. 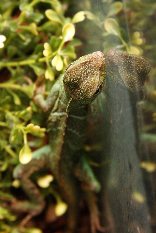 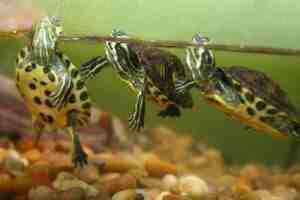 Red-eared sliders are almost entirely aquatic, but leave the water to bask in the sun and lay eggs. These reptiles are deceptively fast and are also decent swimmers. They hunt for prey and will attempt to capture it when the opportunity presents itself. They are aware of predators and people and generally shy away from them. The red-eared slider is known to frantically slide off rocks and logs when approached.
Contrary to the popular misconception that red-eared sliders do not have saliva, they, like most aquatic turtles, have fixed tongues. This is the reason they must eat their food in water. 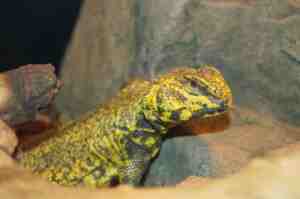 Uromastyx is a genus of African and Asian agamid lizards, the member species of which are commonly called spiny-tailed lizards, uromastyces, mastigures, or dabb lizards. Lizards in the genus Uromastyx are primarily herbivorous, but occasionally eat insects and other small animals, especially young lizards. They spend most of their waking hours basking in the sun, hiding in underground chambers at daytime or when danger appears. They tend to establish themselves in hilly, rocky areas with good shelter and accessible vegetation. 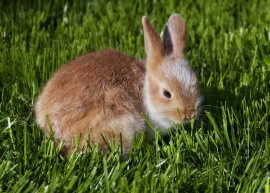 Dwarf lops and Mini lops are relatively new rabbit breeds. The Dwarf lops and Mini lops in Australia today have been bred from rabbits which originated in America and England and arrived via breeders in New Zealand. They have been developed from the Lop which is one of the oldest rabbit varieties. The term “Lop” stems from the characteristic ears of this rabbit which are extremely long and wide and hang either side of the head, touching the ground.

The Dwarf lop was the first of the two varieties to be developed. This was achieved by introducing the dwarf gene to the French Lop rabbit. The Dwarf lops were then further dwarfed to produce the Mini lop. 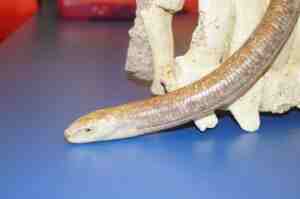 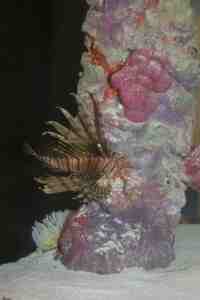 Our 1,000 gallon shark tank is home to many sea life creatures from The Lion Fish to many Eels to our Rays and Sharks.  Students learn and research the different species and their needed care. 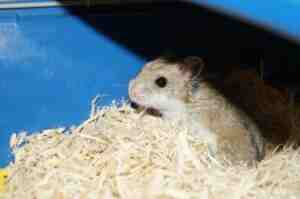 The Chinese hamster is a species of hamster originating from the deserts of northern China and Mongolia. These animals grow to between 82 and 127 mm in body length and weigh 1.7 grams at birth, then as they get older can weigh 30–45 grams. They live two to three years on average. A Chinese hamster’s body proportions, compared with those of other hamsters, appear “long and thin” and they have a relatively long tail.  Chinese hamsters are not related to the social “dwarf” hamsters. The term “dwarf” is often used to refer solely to animals in the genus Phodopus. 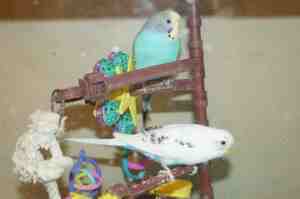 A Parakeet is any one of a large number of small to medium-sized species of parrot, in multiple genera, that generally have long tail feathers. Older spellings still sometimes encountered are paroquet or paraquet. 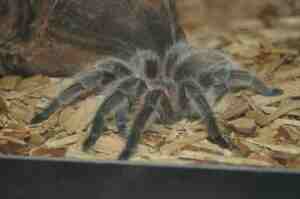 Tarantulas comprise a group of large and often hairy arachnids belonging to the Theraphosidae family of spiders, of which approximately 900 species have been identified. This article only describes members of Theraphosidae, although some other members of the same suborder are commonly referred to as “tarantulas”. Most species of tarantulas are not dangerous to humans, and some species have become popular in the exotic pet trade.  Some genera of tarantulas hunt prey primarily in trees; others hunt on or near the ground. All tarantulas can produce silk – while arboreal species will typically reside in a silken “tube tent”, terrestrial species will line their burrows with silk to stabilize the burrow wall and facilitate climbing up and down. Tarantulas mainly eat insects and other arthropods, using ambush as their primary method of prey capture. The biggest tarantulas can kill animals as large as lizards, mice, birds and small snakes. 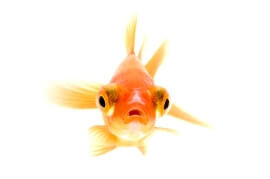 Goldfish were actually one of the first aquatic animals kept to take care of as pets in history. Goldfish originated in China where they are grown everywhere on fish farms. They were very much adored due to their bright colors and due to the fact they were very easily maintained. Goldfish or comets another name for them have been around for centuries. Goldfish have been mentioned in Chinese literature as far back as the 7Th century. In China, goldfish were part of their history and lively hood now as they grow these fish on their farms. History has it that way back then they were kept in small bowls and pools just like today. In today’s world things have greatly improved, now you can get goldfish bowls, goldfish aquarium tanks and goldfish ponds. Goldfish live much like in luxury today with the sophisticated technology with pumps, filters, skimmers available in today’s market.